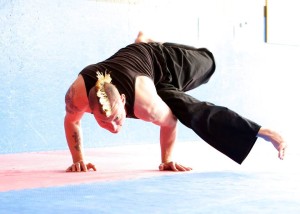 Bradford’s body/mind/spirit journey began in 1991 at Lititz World Tang Soo Do with Master Kifilo. As his disciplines developed, he began teaching weekly karate classes in 1996, and achieved the rank of E Dan (2nd Degree Black Belt). By 2001, he was serious about an Ashtanga Yoga practice. Expanding on his disciplines and anatomy knowledge, he graduated in 2004 from the Baltimore School of Massage. In 2007, he began training 5-Animal Style Kung Fu and Tai Chi with Sifu Nathan Groff, attaining the advanced Brown Sash level. By 2008, he was teaching weekly yoga classes in Lancaster, PA, leading to his 2012 completed training for “Floating Yoga” with one of the top touring/performing aerial dance groups in New York City and Rhode Island. In January 2014, he and his wife opened Float Yoga of Lancaster – info@float-yoga.com.