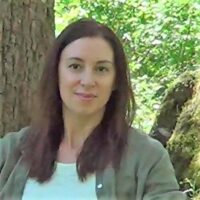 Gretchen is a wife, mother, and massage therapist.  She grew up in upstate New York, to include the Finger Lakes and later lived in the Adirondacks. Gretchen and her husband have worked their way across the country from New York, to Indiana, Wyoming, Oregon, and in 2019 moved to Warren, Pennsylvania, where Gretchen has an in-home massage practice.

In 2000, Gretchen graduated from SUNY Oswego with a Bachelor of Science. In 2003 she graduated from The Finger Lakes School of Massage, Ithaca, NY, with a certification in Therapeutic Massage and Hydrotherapy, and went on to take the NY State board and national exam to become a licensed massage therapist. Gretchen has had her own practice, worked in day spas, and chiropractic office.

In 2015 Gretchen became Board Certified with NCBTMB.  Gretchen has taught horseback riding lessons, dance lessons, and was a tutor with after school programs. In 2017 Gretchen became an NCBTMB approved provider and started teaching massage therapy classes.